Waders for the men 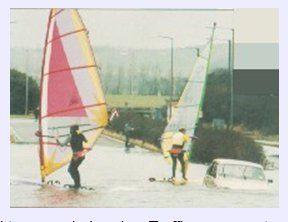 During January 1994 heavy and prolonged rain on the south downs caused the River Lavant, which for much of the year trickles through Chichester, to become a torrent that could no longer pass in the culvert under the city centre.  Diversion of the river led to the the main coast road, the A27 being flooded.  The army was called in and in short order constructed a Bailey bridge over a flooded roundabout and restored east-west traffic.  The Army Benevolent Fund was the beneficiary as grateful motorists passing slowly over the temporary structure willingly filled collection buckets held by the bridge builders.

An article appeared in the Independent

John Adair in one of his books mentions one young officer at Sandhurst on whose annual report was written “Smith is not a born leader yet.”  What are the qualities the army was looking to inculcate within their officer ranks?  Seven years later I was delivering some training at an engineering company in the Midlands.  One of the delegates was a Project Manager who I discovered had been the Major in charge of the company of Royal Engineers building the A27 bridge.  As we reminisced I discovered that a number – but insufficent number – of pairs of waders had been obtained for the troops who were standing in thigh deep running water as they worked on the bridge.  “So the officers got the waders” I quipped.  Only to be corrected in a way that left me in no doubt that the officers put their men first.  Good leadership.

I was subsequently reading a blog which raised the variance between leader and manager.  It provoked me to thought as to how I balanced the mix of roles that I have had.

A few years ago in a discussion over Belbin’s Team Roles Theory an experienced management consultant suggested to me that it was possible to train yourself to overcome one’s natural roles to fill almost every role within a team, slotting in whereever there were vacancies.  He had reached a point of filling all but one team role as required.  So on the ‘not a born leader yet’ principle, is it possible that not only we can be become better leaders, but we can discipline ourselves to behave as a leader, projecting ourself into a necessary role and (perhaps by using other characteristics as well) provide the vision that others catch and and join in realising.

In Insights Discovery language, we might refer to ‘dialling up’ one of our less used colour energies.

So what changes do I need to make to produce that result…?  That’s a journey of self-awareness.