One call or ten text messages? 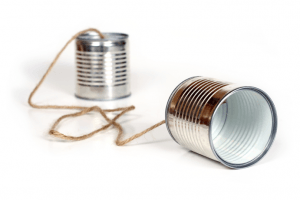 Do you recall those experiments with Tin Cans and String?  You remember, where you could hear the person at the other end almost more clearly without the can to your ear?

Prior to our marriage, my then fiancée and I spent most of two years 700 miles apart.  As a student, I was skint, so we could only afford the long distance phone calls once each fortnight.  Before the popularisation of the home PC, initially we relied on letters to communicate.  While these had the great advantage of being there to read and re-read (and when you’re in love, re-reading is done a lot), the letter didn’t always convey the nuances that a conversation would communicate.  We decided to experiment with recording a cassette tape to each other once a week.  Once we had got over the initial hurdle of talking to a tape recorder in what was an effective monologue, it really did work well.  We could listen for inflections on one another’s voice; for excitement, tenderness and other subtleties which writing on a page could not easily convey.  We maintained this for over a year – recording over one another’s tapes so that only two tapes were required.

I’m noticing a growing preference amongst friends and colleagues who prefer using SMS to chat to one another.  And email for all other communication. Of course, there are times when sending a quick text is convenient, brief and effective.  However, in the workplace, I’m hearing from an increasing number of employers and employees who find that productive work time is being replaced by long email chains and over burdened inboxes.

What are they missing?  It’s good to talk. A ten minute conversation gives the opportunity to listen for hidden emotions, to probe gently, to generate ideas and to reach decisions.  It involves one process instead of many interruptions.

Popular culture is heavily influenced by technology.  In the workplace we may need to re-educate our colleagues that voice conversations have not lost the effectiveness they have delivered for thousands of years and whether chatting around the water cooler, picking up the phone or scheduling a video conference, talking talks volumes.