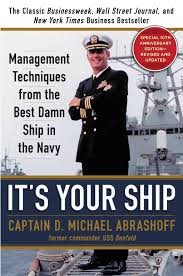 My brother, who works for a global and well known computer components company lent me his copy of It’s Your Ship: Management Techniques from the Best Damn Ship in the Navy, by former US Navy Captain D Michael Abrashoff.

The book contains practical lessons from his experience of transforming the USS Benfold, previously one of the worst performing ships in the US Navy.  His management techniques provide a unique collection of best practice, which can be used with as much success in the business world as they have had in the military.

As a read, I found it easy, practical, entertaining, although at times with a little too much focussed on the one ship example.  It’s not a weighty management tome, rather a fast moving motivating book to challenge managers at all levels on how to invest in top down change.

One of the reviews I found on line identified a need I see as common across industries:

“Over the last few years, I have read a few leadership and management books.  It seems that when I was simply an IT analyst, the larger picture of things did not seem to apply.  I did not really focus on the big picture and tended to keep a narrow focus on my tasks at hand.  Perhaps this was a mistake on my part, and when I was promoted to a department IT manager… I suddenly realized that I should have done a better job preparing myself for this new role. “  Thomas Guettler

Guettler goes on to write:

This book offers many easy to adopt techniques that can be incorporated into any business… An example that stands out for me personally is how Captain Abrashoff empowered the crew to make decisions.  Insecure leaders or managers may resort to micro-managing, and force all decisions to go through them, essentially displaying a general lack of trust in those they manage.  Captain Abrashoff went out of his way to trust the decisions made not only by lower ranking officers, but most importantly, the enlisted members of the crew.  This worked wonders for crew morale.  From their perspective, they were being trusted, and took ownership of the well-being of the ship.

Effectively Captain Abrashoff was using Performance Management techniques to change the working culture of his tradition bound ‘business’.  In a similar way businesses which adopt these principles can expect to see (forgive the pun) a sea change in team confidence and engagement.

You can read Guettler’s review here.